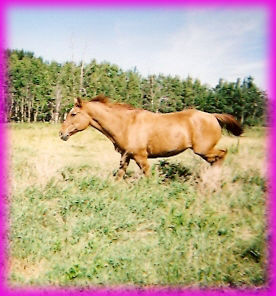 SANDY ROSE
by Gayle Bunney
Owner/Host of this website

This old mare was one of my 2007 Rescues. When I found her, she scored a -2 on the 1 to 9 Body Index Score for Neglected/Starved Horses. Had I not been able to purchase her, I would have immediately reported her to the SPCA.

In this picture she has gained approx. 400 pounds in the several months she has been with me here on the farm. I show her to you in Good Health and full of Vim and Vigour. I chose not to show her to you when she was nothing but a Living, Still Breathing Skelton. Why? Well it hurt me to much to look at the pictures I took the day I found her is why!!!

Was it the Owners Fault??? NOT REALLY!!! She was a very nice girl who cared a lot. She simply was not educated in Senior horses and their Care. She was told the mare was about 14 or 15 years old as she had not had her very long. Feed was always out for the cattle and horses so she did not know why the mare was so terribly thin? The rest of her horses were in acceptable shape.

NOTE: LACK OF ANIMAL WELFARE EDUCATION is one of the main reasons for Animal Neglect. Not because they are cruel people, they are simply Uneducated! BUT: If you approach such people, no matter what type of animal to "Educate" them and still their animal(s) suffer....................then they are Uncaring, Cruel Owners...................REPORT THEM!

She simply could not eat because of her teeth. An awesome, young Vet, Dr. Greg Benoit who specializes in horses teeth went to work making it so she could eat proper and thus also digest the food correctly. He did an excellent job.

I dewormed her and "Buckets Full Of Worms" were passed from her body. I did not deworm her full strength until she was already in better condition. Deworming a horse in such bad shape can "Kill instead of Cure". Always remember that! I also did not place her on full feed until her Digestive System could handle it. Another thing Horse rescuers must be aware of. Start slow with good feed, build up slowly. Don't go whole hog and "Kill instead of Cure"!

I placed her on Antibiotics for an extended period of time until an old, long time existing Uterine Infection was under control.

Sandy Rose has found a Permanent, FOREVER home with a special lady named Isabelle Bonhomme right here in Alberta, Canada. Thank you so much Isabelle.

<< Back To Animal Abuse
Login | Powered By: Techweavers Inc.